I welcome everyone, not just as human being but spiritual being whom God has given Holy Spirit (1 John 3:24, 1 Thess. 4:8) and we are all one in Christ Jesusp (Gal. 3:28). No matter of our differences, as spiritual beings, we are all members of one body, the body of Christ:

But because false prophets and teachers (Mat. 7:15-16) had proliferated worldwide suppressing the truth, causing several signs of the end times as stated in Matthew 24:3-12 & Luke 21:10-11, one major of which is expressed in the following verse:

We are losing our spiritual identity if we continue to disobey God’s will:

We are born of God if we love one another because God is love:

Our lives are screwed up for we mostly use the screwdriver using screw to screw our future up, instead of stapler, the heart, which uses love as the staple to staple as together as one body, the body of Christ:

We now live in the period of uncertainty, not just by various serious issues, like climate crises, pandemic, or possibility of World War 3, etc. One thing can set us free, the truth (John 18:37):

That truth that Jesus testified is written in the Gospel, the word of truth:

And this truth is affirmed by the modern revelation, the 21st Century Divine Revelation, the appearance of the series of miracles revealing God’s will for the modern world as strong spiritual awakening for humanity to live by the truth (John 3:21) which has been suppressed by the false prophets and teachers (Mat. 7:15-16).

In Jesus first coming, the true Gospel indicated the following verses as a strong wake up call for the truth:

Time has come for the truth that Jesus testified in his first coming (John 18:37):

God is Spirit that we must worship him in the Spirit and in truth:

There were three miracles under the 21st Century Divine Revelation affirming the signs of the end times because of what humans have become as expressed in this verse:

Let us wake up. Consider the following that we can the save or prevent the early destruction of the world:

One more thing that we unknowingly have failed to obey the most important command: Do not cause little children to stumble, as expressed in the following verse:

There is the popular saying, “Children are the future.” but how can we really have a peaceful world if we do not for them? How can we attain world peace if there are major problems of the little children of today while the rich and powerful live in luxury?

Hereunder are some listed below:

In direct connection to the above, the following verses:

With this the above concept, I wish to include my research about Pope Francis, not only I was attracted for his outstanding humility as world leader but also this teaching:

I have a strong feeling that Pope Francis one of the chosen instruments for this modern era to bring the world to under spiritual awakening, and this feeling affirmed when he got two accidents, one in Poland, the other in Columbia. The detail of this study is in this link:

And popular term is “Armageddon” the last battle between the good and the evil, and after of which is the Judgment Day (Mat. 25:31-46). In connection to this, one miracle appeared to give the believers a wakeup call to be a “Sheep” not “Goat”:

Life is too hard to give meaning, but I like the following quote:

The above is parallel to this verse:

And affirmed by this miracle: 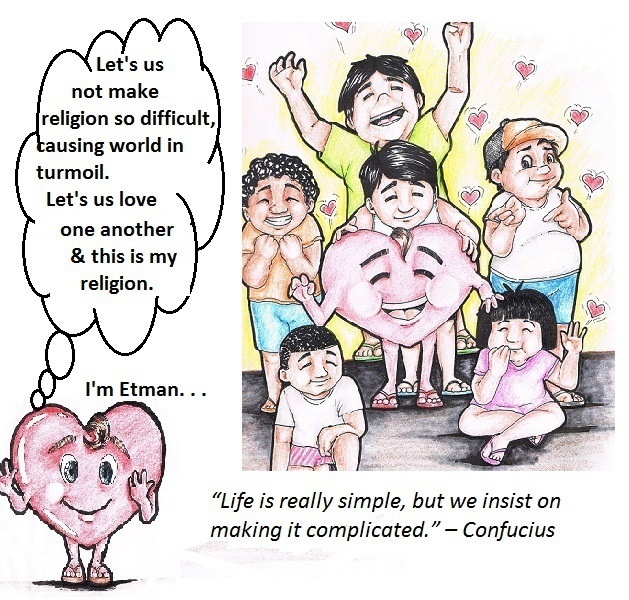 As for me, I like to give a meaning of life by this parable:

A person at sea on canoe paddling on the way home. Then suddenly, darkness appeared in a bad weather. He had to exert energy in one hour to rush up for home before the storm but he could not see anything. The flow or the waves which could guide him was changing direction as where the wind blows. Somehow, one thing he has, the spiritual compass, the heart, and the spiritual paddle, love. He was able to reach home safe.

Ever since, humans had been engaged in a battle on the battleground called, earth. Our outer self and inner self are in constant war to each other, and most of the time, the outer self won, leading to the kind of world we have today. Jesus’ sacrifice on the cross will continue be in vain if we ignore love as expressed in this verse:

Religion became a major part of humanity since time immemorial; it served as an explanation to unknown things and to lessen grief for various sufferings when people experienced natural disasters which they thought as curses or the wrath of God. With the chosen instruments, humans had undergone some degree of awakening and most especially in the coming of Jesus who God sent to testify to the truth (John 18:37) as written in the gospel. The pure and faultless religion in the gospel is this:

However, because of the false prophets and teachers (Mat. 7:15-16), the said religion was not preached and put into practice (Mat. 23:3) causing the evolution of too many religions, even those they believe in Jesus, they have some differences causing them to fight or destroy each other. I just with to bring to the attention to all believers of Jesus’ prayer of unity hours only before his persecution:

Scientists, although most may appear atheistic, are now believers of the existence of God as they discovered more the marvel of nature and the universe. They became convinced of God’s existence. One famous scientist on his time is Albert Einstein as expressed in his quote stated below;

Another is Francis S. Collins M.D. & Ph.D., the director of the Human Genome Project, who reaffirms that information embedded in DNA proves the existence of God. (Interview by CNN in April 2007 in Rockville, Maryland)

Further to what Dr. Francis S. Collins’ reaffirmation above, I wish to include here the no. 2 belief of BioLogos Foundation which he himself established in 2007. This belief is indicated below that I find it parallel with Romans 1:19-20:

The above matches the 21st Century Divine Revelation which I called at first as SMER, which means Scientific, Miraculous, and Epiphanic Revelation. I included "Scientific" because if only the Scripture without scientific knowledge, I will not be able to understand and recognize the various incidents as miracles with revelatory messages.

Based on the research, I formed a formula for a deeper understanding of life in connection with love, science, and agriculture.

Love: To live in God is to live in love because God is love.

Science: Without science, we will not know God’s will, as expressed in the following:

Agriculture: as emphasized by the following biblical verse and quote:

In closing, I wish to present the divine law to be the basic of all human laws for us to attain world peace:

ROYAL LAW, THE FULFILLMENT OF THE ENTIRE LAW

There are many signs appeared that God's wrath has been revealed because of the wickedness of men who suppress the truth, which Jesus was born for (John 18:37).  False teachers have proliferated worldwide causing “Bad Fruits” as in this verse;

Instead the men of God to focus on the truth, they concentrated more on human tradition (Christmas, Lent, Holidays, etc.) and church service (instead of works of service, Eph. 4:11). We are no longer live in the old times; let’s be awakened by the following;

Disobedience of the above results to “Bad Fruit” (Mat. 7:15-16) that the world is under God’s wrath, the current and the worst sign of which is the Coronavirus pandemic. False teachers in sheep's clothing have misled the believers for sordid gain, as expressed in the following verse;